In December, when my dear friend, Nancy, asked us to again honor her beautiful daughter, Ashley, with acts of kindness during her birthday month, I started to think about what I could do this year. Shortly after that, I went to Walmart, and I did my usual – saying “excuse me” or “thank you” while moving around other shoppers, letting people go ahead of me, smiling at others – what I consider to be standard adult behavior, but I saw so many grumpy people, people who didn’t respond and many who didn’t even acknowledge me. I chuckled to myself thinking, well this year would be easy. I practically did a month’s worth of random acts of kindness on one shopping trip. Now don’t start the usual Walmart jokes (which I’ve been guilty of also). It had nothing to do with that. This is a pretty friendly store normally, and the town I live in now, Huntley, is generally friendly also.

I thought it might be a one-time thing, that people were having bad days, but in another store the next day, the same thing happened. People were just not happy, or kind, or at peace … whatever it was. Again, I continued to be kind, doing what I could to make someone’s day a little better. But I also was concerned this might be the new normal. I decided it must be the stress of the holidays, and I let it go at that.

Fast forward to a recent trip to a grocery store in Florida. I thought people had to be as full of joy as I was to be where it was warm and the sun was shining. Again, though, most people were not smiling, did not appear happy, and sometimes weren’t even polite. And this was in Florida!

So now I’m officially concerned. I’m afraid the tone of the country in general has affected us all. I know when things are stressful and people are unhappy or angry, we all tend to pull back from others. I was in a very toxic work situation a few years ago, and as the “divide and conquer” mentality continued to beat us down, we all realized we were so busy protecting ourselves that we lost our wonderful ability to be a great team. We all still cared for each other, for sure, but when the tone of the organization changed, we all changed with it. 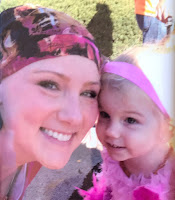 Earlier today, I read the article about George H.W. Bush in People Magazine. It told how modest he was, how compassionate and kind he was, how much empathy he had for others. I think I knew all this, but it really hit home because that’s how the world should work. He never let anything affect how he behaved toward others. If you know me at all, you know I almost never agreed with him politically, but I did always like and admire him, in large part for his compassion. We need to remember how that’s done.

Regardless of how others choose to be, I will continue to choose to be kind, to go out of my way to make someone’s day a little brighter, to act in the way Ashley chose to be, even when she was fighting that damn cancer. If she could do it, there’s no excuse for the rest of us not to.
Posted by Andee Weinberg-Chestnut at 3:32 PM