Living in the Land North of I-80

I have something I should really be doing right now, so as usual, I’m writing a blog post instead! This is my sad history. I could probably rename my blog “I Should Be Doing Something Else.” Actually that’s kind of funny, and I would consider it, but it wouldn’t have that cute play on words with Chestnut. Well, I think it’s cute.

Moving on, I’ve been wanting to do a review, if you will, of my move up to the land north of I-80, what I used to just call “Chicago.” I am about an hour and 15 minutes west of Chicago, which is not at all considered Chicago up here, but back where I come from….. I say that a lot, usually with a twang, because it’s fun, and many people here think it’s real.

I now live in the part of Illinois where a lot of people think of the Peoria, Champaign and Springfield areas as “Southern Illinois” which always amuses me because If they would look at a map, they would see there’s half of a state below those cities, and there really is a Southern Illinois, but it’s actually in ….. yes, Southern Illinois.

Now that I live here, though, I realize I can’t call everything north of I-80 Chicago. For those of you who don’t know, I’m in the far western suburb of Huntley, a place many people here call “the country.” That really amuses me because back where I come from, this is definitely not the country. There are some farms, though, within smelling distance, which was discussed online all day a couple of days ago.

I am part of an online group of people who live in Huntley, and the other day, my Facebook was lighting up with all the posts about the horrible smell that (1) I didn’t notice; (2) kept people from even going outside; (3) had many people calling Public Works; (4) gave people headaches; and (5) made some people wonder if they were being poisoned. I’m guessing many of you reading this, especially the downstaters, are already chuckling because you know the smell just means that farmers finally had a nice day and were fertilizing their fields.

What really cracked me up were all the comments about living in the country. I love that people think this is the country. I suppose it all depends on where you started, but back where I come from, trust me, this is not the country. I went to school at Western Illinois University, which is located, I think by all accounts, in the country. It was my first experience living in a rural area, but it was not unfamiliar to me. Unlike some of the kids from the Chicago area, I did know there was such a thing as a farm report on TV because it was broadcast every day on the noon news, and I had actually seen cows before. I do remember, though, my small-town friends called me the city girl, which confused me greatly because I was just from Peoria, which to me was kind of a small town. All my relatives in New York sure thought it was!

All of this was a very long tangent from what I had intended to say, which was, I am relieved that although it’s a bit different living up here, it’s not as different as I was afraid it might be. I will always think of myself as a downstate girl, and I was a little concerned I wouldn’t like it here because I would feel too out of place. Fortunately, I like it just fine. I almost never have to fly commuter flights to get to a hub airport; I just drive down the road. I’m not intimidated by “Chicago” drivers; I can hold my own, and frankly, most drivers here are not rude as I imagined they would be. Although I do miss my downstate friends and family A LOT, I am closer to old college roommates and other friends I finally get to see, I’ve made new friends here, AND of course, there are those grandbabies.

Shopping
The shopping, well, that advantage goes without saying. Of course, I can find just about everything I want, but I have to tell you about this fabulous grocery store here called Woodman’s. It is huge. There’s a little backstory first. When we had our two Romanian gymnasts stay with us back in 1992, we took them to a Schnucks grocery store, and I have this great memory of them when they walked in. They were holding hands, and they just stopped and stared. Their eyes were wide open, and their mouths were wide open, and we quickly realized they had never seen anything even remotely like that before. On my first visit to Woodman’s, I had to message my girls to tell them I was feeling very much like the Romanians must have felt that day at Schnucks.

I’ll do my best to describe it for my downstate friends. It’s as wide as two Mahomet IGAs (minus the sloping floors), and they have everything … seriously, everything. There is an entire aisle of chips and other munchies. I mean not just a regular aisle … an aisle that spans the entire width of the store. I think they have every gluten-free product ever invented, which, if that matters to you as it does to me, is huge, and rare. With that, I’ll stop on the description because I’m not doing it justice, and I really just wanted to throw in the comment about the sloping floors at the IGA, which always made me laugh as I’d watch my cart roll away. But here’s what I quickly learned. You have to have a smart plan of attack to get through in any reasonable amount of time, and you definitely do not want to start at the frozen food section because by the time you go to check out, your frozen food will be halfway thawed. True story.

More About Food (Surprise)
As I once wrote, one of the perks to moving up north was that I would be able to eat at Portillo’s or Giordano’s whenever I wanted. I lived in Champaign County for 26 years. For 26 years, if I wanted Portillo’s or Giordano’s or Red Robin or Oberweis, I could only do that after a three-hour drive north. I swear as soon as I announced my move, all four of these restaurants decided to open in Champaign. Not one, but all four. Twenty-six years, people! 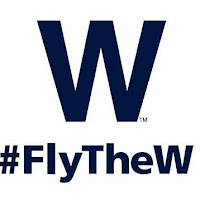 I had to save the best for last. Let’s think back to that fabulous day in 2016 when the Cubs won the World Series. (I still can’t say that without smiling.) You know, back where I come from, there is a fierce rivalry between the Cubs and the Cardinals. Even the Chestnuts are divided about half and half. So watching that beautiful win up here ….. well, it was even sweeter than sweet. It seemed like everybody here was happy. The next day, teachers understood that most of their students had been up past midnight. Schools even played “Go, Cubs, Go” over the intercom as the kids walked in. And as grateful as I was to witness the win, I have to say I was even more grateful that I was able to watch it up here in the land of horn honking and fireworks.

So there you have it. You know, sometimes I finish a post, and I think, “Maybe this can make a difference.” I would just like to say this is not one of those times. But I did have fun, so if you’re still here, thanks for sticking with me. I hope maybe you chuckled a little bit too.