When you start blogging with a story about an emergency plane landing, what do you do for an encore? It’s hard to follow that. I do remember saying it was time to put that experience “on the list.” (I love lists.) Then I thought, wait. I don’t have a list for that. I have a to-do list. I have a contact list. I have a bucket list. I have a “Move or Not Move Closer to my Kids” list. So today I will add to my list of lists with a “Things I Never Want to Experience Again” list.

We’ll add “Emergency Landing of any Kind” to that list, and now for the others.

As I thought back through my history of trauma, I realized, first of all, I’ve been pretty lucky because the list is not long. But there have been moments, and starting at a fairly young age.

How I Became the Lightning Mom

Back in my Peoria kid days, I was, as usual, with my best pals, Jackie & Janet. Although it was rather nice where we were, there was thunder rumbling in the distance, so we thought we would go out to their dad’s station wagon and pull in “The Skil Tool Man” display that was sticking out the back window. Two of us were in the car, and one was standing outside, when the biggest flash and the biggest zap I’ve ever witnessed, flashed and zapped, and I remember we all froze. Lightning had struck one of their trees, and amazingly, somehow did not strike us.

The fact that I remember the Skil Tool Man shows how that moment is imprinted in my mind. So, as you might imagine, the three of us developed a very healthy respect for lightning. Years later, as a softball mom, I watched many a game affected by weather. Depending on the umps, the game was either stopped immediately after a flash or rumble, or they played a while longer, and sometimes too much longer. Enter the Lightning Mom. It used to really irk me that some adults entrusted with kids’ safety didn’t appreciate the seriousness of lightning. Not only did I have that experience as a kid, but on the job, I’d had much safety training involving lightning and how to make sure people didn’t get struck by it. So, let’s just say sometimes some of the umps needed some educating. You’re welcome.

I Watched a Tornado

This really happened. It was in Peoria, maybe in the 70s? Now stop right there, I know when you see 70s, you think, “Uh, huh. It was the 70s.” But I did not dream this. There was a white tornado in Peoria that skipped over the city of Peoria and landed out in the country north of Peoria and took out a couple of houses I think. No one was hurt, which, of course, is the good news, but there it was. I was at the dentist, when the siren in the parking lot starting going off, so we looked outside, and man, I wish we’d had smart phones back then because there was a real live tornado. The strange thing, well, there were several strange things, but one of the strange things was it looked like someone had taped a white tube over the rest of the normal world. Seriously. The sun was shining where I was (hence, the white tornado), but just north of us, maybe a few miles away, houses were being destroyed. And that’s the second strange thing. Where I was, stoplights continued to change, traffic continued to move, and everything was normal……..except if you looked to the north you could see a tornado on the ground.

I did just google “white tornado, Peoria, IL, 1970s” and I found a list of tornadoes in Illinois counties (www.tornadoproject.com). There was an F4 tornado in Peoria County on June 29, 1976 at 1:45 pm. There were two other tornadoes in Peoria County in the 70s, but they were in the evening, so I wouldn’t have been at the dentist, so I believe I have found my white tornado. I love the Internet almost as much as I love lists.

One Tropical Storm/Hurricane is Enough

I have to admit, I have never been in a hurricane, but being in a tropical storm, although cool, was more than enough, so we’ll just throw “hurricane” in there as well. It was Tropical Storm Jeanne several years ago, and I was on Fort Myers Beach with my two partners in crime, Jan & Tonya. We knew it probably was coming our way, but we weren't very concerned because we were in Florida, together, laughing and generally having a great time because that’s what we do when we’re together, and then the National Weather Service posted the warning. So we went to our emergency plan. We closed the hurricane shutters, we ordered Chinese food, we stocked up on refreshments, and, I love saying this, we hunkered down. During the night, the wind started whistling, really whistling, like what you would hear in a movie, so we did what all sane people do because, well, we’re from Illinois, so we went outside to see it. Here’s proof. 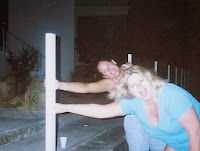 Ok, so we thought we’d try to fake some tropical storm adventure pictures before the actual storm started, but somebody had to put her cup down, which, as you can see, wasn't blowing in the wind, and well, it seemed like a great idea at the time.

Then in the morning, Tonya and I decided we had to check out the beach. So we went out to the beach, which was crazy swirling and blowing, and the water was way over where it normally was, and then we realized with a wind that strong, something blowing could actually hurt us, so we ran back to the condo. Funny thing about tropical storms, I now know. The wind is seriously strong. It kind of took over, and we literally could not stop running. It almost seemed as if we were flying. The only way we could stop was to run around to the other side of the building so the building blocked the wind. True story. Here’s the proof.

There was one other thing I’d thought I’d mention, but now that I realize I have a weather obsession, I’m a little concerned about the fact that the other thing I have vowed at some point in my life to not experience again is, um, another weather event. So, I will talk about how much I hate Illinois winters another time.

I don’t have a good ending for this, but I guess I got us to stop thinking about emergency landings.
Posted by Andee Weinberg-Chestnut at 1:21 PM