My heart is among many hearts hurting today. Ashley has died. I’ve written about her before. She played softball with my girls, she fought as hard as anyone who ever fought against cancer, and she left a beautiful little girl. I’ve tried really hard to be positive like Ashley always was, but frankly, it’s hard not to be pissed off. All she wanted … ALL. SHE. WANTED. … was to have time with her little girl … to have more time with her precious Avery … but that despicable cancer took her away. 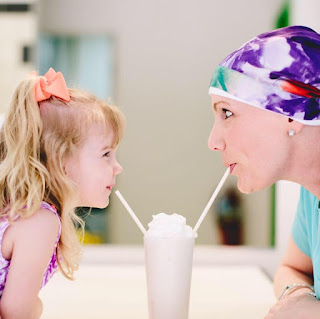 Why does a young mother get stage 4 breast cancer? She had so much to give the world. She was so strong, so smart, so funny, kind and brave. We needed more of her. But cancer isn’t kind … or fair. I think we all know that one.

Her mom, Nancy, is my friend. She’s an incredible woman, and instead of allowing herself to fall apart, she stayed strong because she knew she had to help her daughter die. I know, again, that cancer isn’t fair, but her family doesn’t deserve this either! Her dad, Rex, would have traded places with Ashley in a second if he could. Both of them would have. No two parents could possibly love a child more.

I really thought Ashley would be one of the miracles … that if anyone could beat it, she would. She did everything she possibly could. EVERYTHING. And so many people prayed so hard for her. Every night I prayed for her, and I asked God to give her some extra strength from all of us. I thought maybe a little extra from all the people who loved her could help. And maybe it did. In the end, though, it wasn’t enough.

But this I know. She will be remembered. She did make a difference. The time she did get to spend with her family, and especially with her little one, was so valuable. She made every second count. I can’t help thinking of Princess Diana and her two amazing sons who are now honoring her memory in such beautiful ways. I believe Avery will also grow up to be like her mama, an incredible woman who will make a difference in the world.

Ashley was and always will be my inspiration. In the space of a year, her teaching job was cut, her marriage ended, she had a baby, and she was diagnosed with cancer. And what did she say on her daughter’s first birthday? She said it was the best year of her life because of her beautiful Avery.

That is what I will remember most. I will honor her every day of the rest of my life by trying to live up to that. I will remember what’s important, and I will appreciate every day. I will do what I can to make the world better, and I will always keep with me the spirit of this amazing young woman. I am so grateful that she lived, and Ashley, you really did make the world better.

Posted by Andee Weinberg-Chestnut at 3:56 PM