After my last post, which was shortly after my mama’s funeral, I had to check out for a while. As I mentioned before, I learned exhaustion can be a big part of grief, and it surely has been a huge part of mine. Although I found myself tearing up much more than I usually do, it was the exhaustion that would hit me like a freight train. Every day at some point, I had to stop everything I was doing and close my eyes, sometimes for several hours. Then I realized one day I had gone all day without a nap break. I thought it was a fluke, but then a few days later, it happened again. Now I’m back to most days being ok. Not all days, but I feel like I can function a bit more, and the fog is finally starting to lift. I’m still going easy on myself, but I’m starting to feel human again. I understand, though, that grief is a process, and I feel better, but I know something as powerful as losing my mom will take time.

Last time I posted, I wrote about so many of the kindnesses we experienced in the care and then loss of my mom. The things I have to say now are a bit more personal. I don’t think it’s a secret to anyone who knows me that I love my girls and those two baby boys more than anything in the world. Truly more than anything. I am so proud of them, and the amazing thing is just when I think I couldn’t be prouder, they prove me wrong. 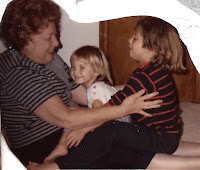 My girls had such a beautiful relationship with their Grandma Rose. I remember hearing once that parents should light up when their children walk in the room. I always felt that from my mama. I always felt she was happy to see me and genuinely interested in my life, what was happening, what I was thinking and feeling. And that welcome, the joy, the happiness that she felt when I walked in the room was not even remotely close to how she would light up when she saw her granddaughters. We always laughed about how the Gs, as we referred to them, would be ridiculously excited when they’d see the girls out on their step. They’d hug them, kiss them, spin them around and hurry them inside so they could play with them or show them a new toy or read them a book or feed them or whatever. And Dave and I would often be left outside to carry everything in. We became the afterthought. Sometimes we’d be lucky enough to get an, “Oh, hi!” Uh, huh, we got it. We were the chauffeurs, and that was pretty much our job, although I will say they did feed us and let us use the facilities, so there’s that. 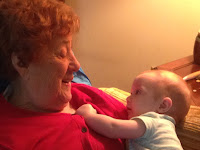 I don’t have to tell you how hard it was for the girls to lose their grandma. What I want to tell you is how amazing they were in her last days. They put aside their own sadness and focused on their grandma. Leah came down with the boys, and Grandma Rose was overjoyed to see them. Leah spent time alone with her grandma, which they both needed. Matt held up his Great Gaya's favorite items so she could see them. We took her outside for some fresh air. Matt “helped” to push her wheelchair, and she was very appreciative. Nathan pulled himself up to get closer to her. Even his very young self knew she was special. And yes, she would light up every time she saw either boy.

Matt, of course, could only sit still for a while, a short while, so he took it upon himself to monitor the hallway to make sure no one fell and got hurt. You can only imagine how much he brightened people’s days. Another sign of a good care center – when children are not only allowed, but welcomed. Lutheran Hillside was big on that. Then when he felt things were ok in Great Gaya’s hallway, he would take Aunt Boo (also known as Lindsay) and go to all the other hallways to make sure those people were ok too. One man saw us walking with the boys and asked if we could visit his wife so she could enjoy a minute with them. Of course, we did. I’m happy that Matt lost most of his initial discomfort with old or sick people, that he understood it was important to visit with them and be kind to them. We didn’t have to tell him that. He just knew it because he has a kind soul (and wonderful parents). 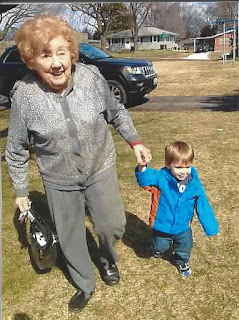 Leah had to say her goodbye and head home with the boys because four years old and nine months old do not a peaceful situation make. She had a talk with Matthew later, explaining what was happening and that if he saw his mommy or gaya crying, this was the reason, and it was ok to be sad. Matt climbed up in his mommy’s lap, and the two of them did some of that ok crying. I have to admit, I hadn’t thought Matt would really get what was happening, but he also had a relationship with that wonderful woman.

Lindsay was able to spend more time with us, and watching her with her grandma was also a beautiful thing. She would sit and talk with her, she’d stroke her arms and put lotion on her, and she would give her drinks and put lip balm on her lips.  I know we didn’t specifically teach the girls these things, but somehow they knew exactly what to do. At one point, I recall them saying that Grandma Rose always did those things for them. True story.

I also have to mention my other people – some related and others chosen. I am so blessed to have so many good friends. I read this once – true friends are those who will drop everything and come cross-country if you need them. I can name right now at least ten people who fit that description. How lucky am I?? The interesting thing was during all the days I was with Mom, not a day went by that I didn’t get a text or an email or a message from at least one of them asking if I was ok, if I had gotten any sleep, if I needed anything, that they were thinking about me. It didn’t surprise me really, because that’s why they’re my close friends, but it was almost as if it were coordinated. It couldn’t have been, because they don’t all know each other, and they live all over the country. The point of this, though, is good friends are always there, and I am so lucky to know what true friendship is.

Well, you know how the story ends, but as hard as the goodbye was, the joy of having had this amazing woman in our lives far outweighs the sadness.

I’m going to stop here, but I might still have a little more to say. Shocking, I know. I’ll be back.
Posted by Andee Weinberg-Chestnut at 3:56 PM No comments: