I don’t think my choice in the recent election would be a surprise to most people. To my friends who voted for Trump, I want to be clear. I still like most of you. A few of you, I never really thought much of to begin with, so if our relationship doesn’t survive, I think we’ll both be ok. And if you are wondering if you’re one of the ones I don’t like, you’re probably not one, because you should already know it, and you should pretty much know why.

Anyway, my point is, we have to move forward. I am going to try very hard not to be offensive in my comments and actions over the next few years, and I hope you can do the same. But here’s the thing. I have to stand up for what is right.

I’m not really happy about having to do this. Finally…..FINALLY…..I sold my Mahomet house, and we just closed on our parents’ Peoria house, and I’m somewhat settled in the only house I have left (Lindsay refers to it as my shedding of houses), and I’m finally…..FINALLY……at a point where perhaps I can slow down a little bit, crochet a blanket, attack my bucket list, or read a good book, and BAM, instead, I’m forced to stand up.

I have to believe those of you I still like do not support mistreatment of people for any reason, but especially based on the color of their skin, or their religion, or their sexual preference, or their gender or abilities. I have to believe you are not racists or bullies and wouldn’t stand for someone else being a racist or bully.

And maybe a lot of you can look the other way or close your eyes. Believe me, for about a week or so, I totally planned on doing that. I’ve learned I don’t have to take on every problem in the world, that I don’t have to read in great detail about every horrible news event, that it’s ok to walk away on some things, and I absolutely planned to do that. 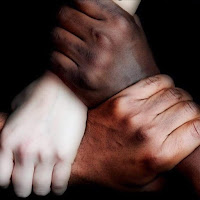 But dammit all to hell, I grew up in a Jewish home and a Jewish community, and if I take one thing away from my upbringing, it is to stand up for what is right. It is to NEVER let mistreatment of people happen again. That’s what I remember hearing: “NEVER AGAIN.” If you didn’t grow up in my world, you might not understand how important this is. But it’s huge. It’s a commitment I owe my parents and their parents and the millions of innocent people, some of whom were my family, who were slaughtered in the Holocaust.

When you have that in your background, how can you remain silent? The last time a lot of people remained silent and turned their heads, it didn’t end well. And I cannot be one of those people.

I’m not at all happy about this. When I was back in the working world, right outside my office was a huge tower that had about 100 steps in it. One day there were some kids up in the top bouncing golf balls to the ground below. You can imagine the horrible outcome if they happened to hit someone. So, I had to climb the stairs to stop them and explain to their grownups why it wasn’t safe (seriously). I was not amused. When I got to the top, I told them they were in trouble for two reasons. One was for the golf ball throwing, and more importantly, they had made me climb up to the top.

In a much more serious way, I feel again, like I have to climb up to the top. I am not at all happy about this, for the record, but I gotta do what I gotta do.
Posted by Andee Weinberg-Chestnut at 11:28 AM