Since Mom died, we have been attempting to clean out our parents’ house. We knew this time would come, and we knew it would be a challenge. We were correct.

Our parents were always packrats, which I’ve learned is very typical of people who lived through the Depression. That, along with the hoarding behaviors that often accompany Alzheimer’s, left us with, for lack of better words, a hell of a lot of stuff (3,000+ VHS tapes, 1000+ books, papers from the 1960s…….you get the picture).

When Dad passed away in 2012, my sister and I started on his things. His office was the worst. We couldn’t even walk into the room. Things were piled on piles upon piles. We removed bags of papers and other “stuff,” and it didn’t make a dent. Seriously. No one else would have known anyone had even touched that room, so we had to celebrate our small victories between each other, just so we could keep going.

Shortly into this process, we realized this was taking us away from precious Mom time, which we already knew was somewhat limited. So we stopped. We closed the door to the office, and we spent whatever quality time we could with Mom, knowing the stuff would not go away. Again we were correct. Now that Mom is gone, we are so grateful we grabbed that time with her. And the stuff didn’t go away. We joked sometimes that it actually multiplied when we weren’t looking.

I’ve learned a few things along the way – some from people who have been through this and some as we have been going through it ourselves. For what it’s worth, I hope this may help someone else.

I should note that I think an estate sale is a very good option, but Mom had always said, even before the Alzheimer’s, that the idea of people picking through her things was unbearable to her. I think this had something to do with her fears as a child as she watched families and their things being put out on the street. I’m not completely sure, but because she was so horrified by the idea, we didn’t go that route.

The first thing we did was make sure the important things went to the family members who wanted them. When I say “important things,” I’m talking about things valuable to us individually, not necessarily things worth any money. We all had different memories, so fortunately, we didn’t have a problem dividing things. Some items were important to all of us, but more in the sense that they needed to stay with someone in the family. I didn’t really need a chair, but we agreed Mom’s favorite chair needed to stay among us, so I’m keeping that. My sister, the family historian, is keeping all the photo albums and scrapbooks and important papers.

The kids decided the blocks, dolls and other toys they (and then the great grandsons) had played with, should still be toys at grandma’s house, so they wanted them to go to my place. I liked that idea also, especially that those memories were special to them and would continue, and I loved that they thought of it.

Over the years, Mom would ask us what we wanted. We would try to change the subject, but she really did want to know. So we did discuss it sometimes. I always wanted the Shalom needlepoint she worked on for practically ever. I also wanted the needlework given to her as a gift from her best friend, Pam, who had taught me to stitch, which created for me a lifelong hobby.

Leah wanted the pan with the broken handle, which always confused Grandma Rose. “Why in the world would you want a broken pan?!?” she would say with amazement. Leah explained to her that this was the pan Grandpa always used to make matzo brei (our favorite dish and his specialty). It’s true. You cannot look at that pan without hearing, “Who’s ready for matzo brei???”

Lindsay told me she wanted the kitchen table. I was really surprised. It’s just a table. It’s not even a particularly nice table. I remember giving her a funny look as I said, “Really?” She didn’t hesitate as she said, “That’s where we sat to do all our projects.” As I write this, I can picture Mom with the girls at the kitchen table, their heads bent over as they all busily worked on the next special creation. 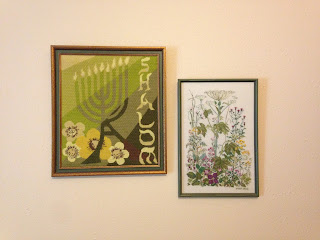 Those were the things that mattered – the things that triggered good memories. I know for myself, every time I walk by the needlepoints, now in my house, they make me smile. Those things actually made us feel good, so we focused on them.

I should add, it took several visits to feel comfortable taking something. We were fortunate we had the time to ease into it. I can’t say it became easy, but the more we were in the house without our parents there, the less difficult it became. I was having trouble removing Mom’s needlepoint, and Lindsay suggested perhaps if we moved everything from that wall, it wouldn’t look so much like there was something missing. That was a great idea and immensely helpful.

After the important things were removed or set aside, we got back to the stuff – items to pitch, items to recycle, items to donate, and items we put in an “I don’t know” or “I can’t go there yet” area. We had to stay on task or we’d never get anywhere, so if something might be difficult, we set it aside for later. That allowed us to continue to move forward.

I drove to Peoria every couple of weeks so I could chip away at the house, taking numerous trips to the recycle drop, bagging up trash, donating books to the used book store, clothes and other items to Goodwill, going again to the recycle drop, donating more books, going back to Goodwill, and then rewarding myself with Avanti’s. Advil and Dan Fogelberg were necessities for my physical and mental well being. And naps. As I had been advised, taking care of myself was necessary also (took me years to learn that). And then up I’d go, to start it all again. Everything that left the house was one less thing to deal with later. That was pretty good motivation, but there was still SO MUCH STUFF.

Enter Lindsay. She had some time so she offered to come up and help. I believe my exact and immediate response was, “Oh, hell yes!” And boy, did she help! We spent five days there together, and I learned some more things. The younger generation is strong and has energy, and I should have tapped into that resource sooner. I also happen to like her a lot, so five days with her was fun. Five days with the wrong person could be a nightmare, and I would avoid that at all costs.

Time with Lindsay reminded me of another important thing, one I actually wrote about earlier - Always Find the Funny.

We laughed a lot. Every time one of us would climb up on something, the other would channel Grandma Rose in a panic worrying about someone getting hurt. I can still hear Mom’s voice from when I hung the curtains in the kitchen. “Anndeeeeee!” followed by my exasperated, “Mom! You have to stop that!”

When we’d go to bed, someone would say, “Ok, Roo (the cat). It’s time for bed? Let’s go then.” He was her alarm clock, and it was always a cute moment.

Lindsay and I were carrying a mattress out. In the middle of saying, “Ooh, I need a break” I dropped my end and nearly pulled Lindsay down with it. We were both doubled over laughing as she said, “Uh, do you think you could give me a little more notice next time?” We continued to laugh, and when I could speak again, I said, “I’m sorry. It came on me like the shits.” More hysterical laughter. Yep, still funny now.

Moving on……by the time Lindsay had left, two rooms were completely empty. Completely empty! And one of those was Dad’s office. Done! This was huge. There is still a long, long way to go, but this was HUGE.

And the very best thing…..Lindsay said she’d come back if I wanted. That got the same “Hell, yes!” again from me. I do believe with another visit from her, we can almost finish everything. I don’t want to set us up to fail, but I think we can do it because again, the hard part is going through the emotional triggers, and for the most part, we’ve faced those.