My Trip to the South

Wait. Another post in less than two months?? I know, I know. I wait forever to post something, and then they’re back-to-back. Well, that’s how my mind works. As my friend Ashley (cute4cancer.blogspot.com) once wrote, “I write blogs in my head all the time.” I knew exactly what she meant, because so do I. Some of them don’t make it to the posting stage; some of them I decide I don’t want to do or I’m not ready to do; and a lot of them percolate in my head until I’m ready to write them for real. (Side note for the younger crowd: “Percolate” is how your grandparents made coffee before our generation thought we were something special with automatic drip.)

I do have some more things to say. I just got back from my annual trip to the National Recreation & Park Association conference with the usual side trip afterward. As you may recall, last year on my way to said conference in Houston, I had to jump out of a smoke-filled plane after a very scary emergency landing. As pleased as I am that that experience inspired me to start this blog, I’m even more pleased to report that nothing eventful happened during any of my four flights this year, and believe me, no one appreciated that more than I.

Of course, it couldn’t be completely problem-free. It did involve Andee and traveling, after all. With a 15-minute delay on my first flight and a very tight connection in Detroit, with gates on opposite ends of the airport, of course, I had to do some serious hustling to make the connection. When I got there, I was huffing and puffing with rubberband legs. But as always, I found the silver linings: (1) I made the flight; and (2) I got my booty back to the gym.

To really rub it in, the next evening I was chatting with two scholarship winners, and they were discussing various marathons they had run – not bragging, just discussing it like everyone runs marathons. Thinking back to my only recent run in any number of years (see above paragraph), I realized I had nothing to offer the conversation, so I excused myself and went to get food.

This year, the conference was in Charlotte, North Carolina. What a great city! I had not been there before, and I didn’t know what to expect, but I learned it was full of charm and lovely people. The owners of the condo I rented left me a tray of food, a stocked bar, soft music playing and a note asking me to text them when I got there to let them know I arrived safely. I have rented many condos, and most of them have been quite nice with very nice owners, but this welcome almost made me cry. And I learned pretty quickly that people in Charlotte are just that nice. While I was there, the Hornets invited 17,000 middle school students to watch them play a game one day so they could talk to them about bullying. How cool is that? Because I was working, I didn’t get a chance to play very much, but I do plan to go back to this lovely city, and I highly recommend it to anyone looking for a nice place to visit.

My side trip this year was to Charleston, South Carolina because I had always heard it was a beautiful place to visit and there was a beach about 10 minutes away from it. I learned a lot while I was there. South Carolina was the first state to secede from the union; Charleston is the home of Fort Sumter, where the first shots of the Civil War were fired; and Charleston was also a major port for slavery. There was certainly a lot of history, and I spent two days touring the sites. I visited the Magnolia Plantation, where I listened to a presentation by Joseph McGill, who is a descendant of slaves. Sadly, I learned more from him in one hour than I ever learned in any history class. All I remember was memorizing dates and battles and a blur of details that don’t really matter. We never learned about the people.

The slave cabins at Magnolia Plantation have been restored, and I was able to visit them. I learned that Mr. McGill also started The Slave Dwelling Project (slavedwellingproject.org), with the goal of restoring all the slave dwellings that still exist. There is a wonderful article about this in the October 2013 issue of Smithsonian Magazine, where he was quoted as saying, “Americans tend to focus on the ‘big house,’ the mansion and gardens, and neglect the buildings out back. If we lose slave dwellings, it’s that much easier to forget the slaves themselves.”

I’ve sort of gone off on a tangent here, but I was totally absorbed in everything this man had to say. It was a strange thing to be in actual places where slavery existed, and I often found it difficult as I imagined what it must have been like. I tried to be as objective as possible, but that was difficult as well. How could people fight for their way of life when their way of life involved owning and mistreating other human beings? Would I have felt differently if I lived in that time and was raised in the South? Would I have been one of the people who stood up for doing the right thing? I’d like to think I would have since bullies really make me angry, but would I have been a different person if I’d been raised in a different time?

The next day I took a tour of historic sites in the city of Charleston. A lot of it was very interesting, and again, there was a great amount of hospitality even from random strangers. Tourism is a major industry for them, and they do it very, very well. As the tour was wrapping up, though, we passed an official looking building. Frankly, I don’t remember what the guide said about it except that she pointed to some stairs and said that was where most of the slaves were sold. Then the tour went on, and soon she was asking if people wanted to be dropped off at the downtown market.

I could not shake the picture of those stairs, and the people who once stood on them, and the children being torn away from their parents, and the human beings who were beaten and in chains and shoved around and forced to give up every shred of dignity they might have once had. Who wants to be dropped off at the market?? No one else seemed to be moved or saddened by this at all.

Even though I was renting a place on a nearby beach, I decided that afternoon that I was ready for my visit to end. The knot in my stomach would not go away. Then the next day I was souvenir shopping across the street from my condo, and I saw this: 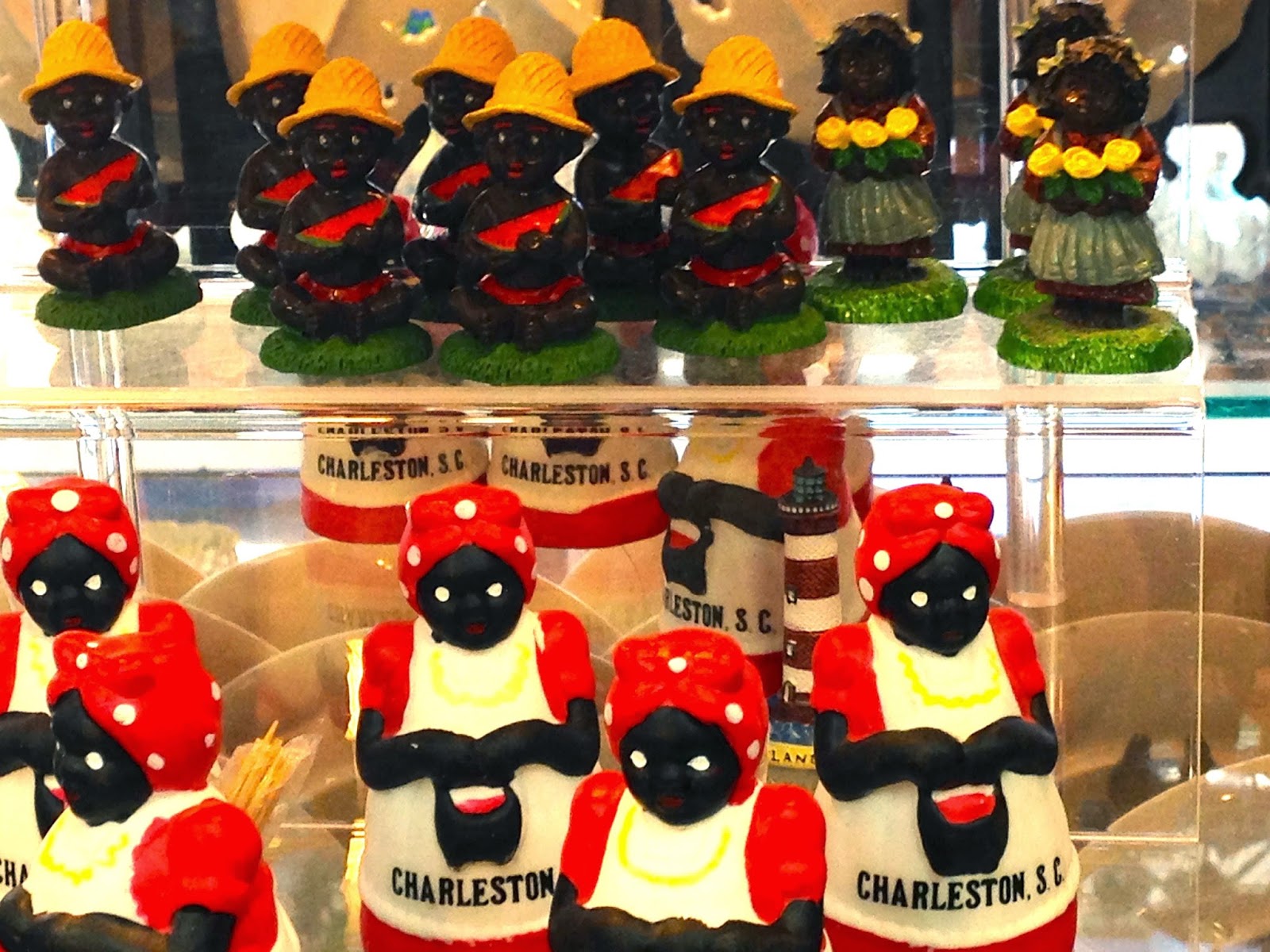 This was being sold in 2014. I couldn’t even believe things like this were still being produced, let alone being sold. But there they were.

Unfortunately, the stairs and that disgusting photo are two of the last images of my trip, and they seem to be burned into my brain. Maybe that’s good. Maybe I need to remember those two things. It seems we still have work to do.
Posted by Andee Weinberg-Chestnut at 3:31 PM