Since I didn’t hold back about the bad parts of my recent experience with American Airlines, I now need to acknowledge their response. Yesterday, as I was googling American Airlines corporate leaders for my next round of correspondence, an e-mail appeared in my inbox from the airline. It was a response from a real human (thank you, Anita J.), who actually did read what I wrote, and she provided me with a decent voucher and an apology.

Here are some excerpts:
“Please accept our apology for the difficulties you encountered…We are truly sorry to hear we didn’t provide the level of service you expect and deserve…What we can and should do is make every attempt to minimize the inconvenience for our customers when we encounter operational problems. We are disappointed that we didn’t do a better job….”

The letter went on to say my concerns and questions regarding what actually happened on the plane were forwarded to their Risk Management Department, and they would respond to me within 15 days.

Could I fight for more? Maybe. But the goal wasn’t to get into a war with American Airlines. My goal was for them to apologize (they did), for them to own their mistakes (they did), and for them to provide me with some reasonable compensation to encourage me to continue as their customer (they did). I am satisfied with their response, I will appreciate my next round trip to the beach being on them, and I am considering the matter resolved. 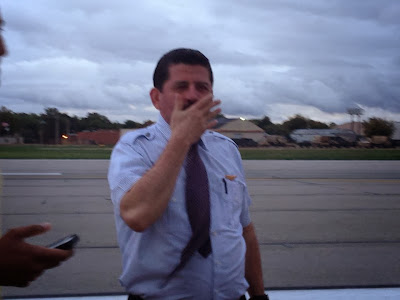 I know many people reading this will be shocked to know I have a few more things to say.

Without even knowing most of the 46 other passengers on my flight, I think I can speak for all of them when I say we were slightly offended by the only Peoria Journal-Star article on our emergency landing. “An American Eagle flight … turned around and made an emergency landing Sunday after a heat or smoke sensor went off, Airport Director Gene Olson said.”

I don’t think I need to say much more than, trust me, it was more than a buzzer. Here is a link to a more accurate follow-up story from WEEK TV in Peoria, and it is appreciated: http://www.cinewsnow.com/news/local/Peoria-to-Dallas-flight-forced-to-make-emergency-landing-226744231.html

This still makes me laugh. When we were discussing our potential last thoughts, one of the gang of four said she felt bad that she didn’t think about her family, because she loves them dearly; and she wasn’t praying, which her church family would be unhappy to know; but instead she was trying to calculate how many minutes of oxygen we might have left. It amused me so much because I know and even love a few scientists, and I could see them doing the same thing. We all went to our safe place.

I wish I knew the name of the young woman who let me use her phone to text my girls. To the woman with the beautiful smile who was a trainer for, perhaps, an insurance company, thank you again.

Someone in Row 8 videotaped the entire plane experience. I would love for that person to post the video online.

Some of the younger people in my life have commented that they don’t know how they would react in a situation like the one we experienced. I have to say that I honestly don’t know what I would have done or how I would have handled it if I were 20 or 30 years younger and/or I feared leaving my small child. That would have presented a whole new level of distress. I do know, however, that I still would not have screamed the entire time.

I am the queen of mechanical difficulties and flight delays. I normally don’t react much because they happen so often in my life that I'm sort of the running joke of travel delays. This was different.

I think, for the most part, I’m ok. My re-sprain of my ankle is healing, and mentally, I think I’m generally pretty tough. I do have to say, though, there were some “moments.”

During our group’s banquet at the conference, the power went out, and the room went dark. My initial thought (to myself) was, “Oh, dear God, what’s happening??” My brain knew it was not a big deal, and the rest of me came to that conclusion shortly afterward, but it was a startling moment that normally would not affect me in the least. I went to my safe place and texted my girls. Leah sent me a picture of Matthew, my grandbaby. Crisis averted.

On the second leg of my trip home, I realized the flight number was the same, 3176, and I was in the same seat, 5A. I did have to wonder if someone was messing with me, and I did have to take some deep breaths and talk myself through it a bit. I reminded myself I knew exactly where the emergency exit was and I could jump myself right out of it.

This was an interesting situation, and I wanted to ask the flight attendant, but I didn’t want to be “that” passenger (a very funny Friends episode involving flying comes to mind), so I didn’t say anything, but here it is. There was no one seated in one of the exit rows. So what happens if there’s an emergency landing? Who opens that door? I decided I would do one of two things, either jump across and back one row and do it myself, or just go out the exit door behind me and call it a wrap. It did concern me though.

I’m alive, I’m grateful, I encountered a lot of wonderful people, and I witnessed a lot of human kindness.

A few days ago, as I was again coming in for a landing in Peoria, and as I was again watching our approach, I realized I was smiling. It's all good, and it's time to move forward.
Posted by Andee Weinberg-Chestnut at 12:46 PM